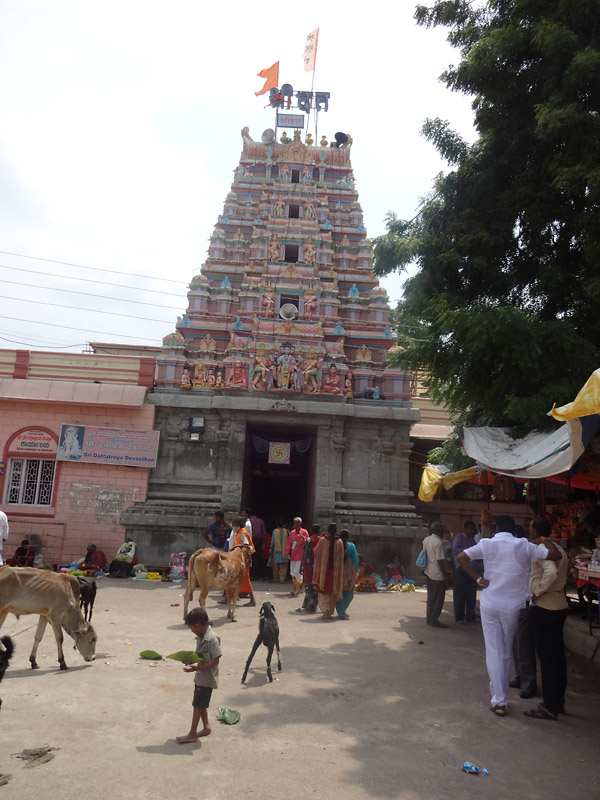 ganagapur is a famous spiritual place associated with lord dattatreya and his second avatar (incarnation) sri narasimha saraswati swami. it is considered as one of the foremost place to be visited by lord dattatreya devotees.

sri narasimha saraswati swami stayed in ganagapur for 24 years. he cured many people and taught the path of righteousness and self-realization here. he was a very compassionate master and helped many people as per their need. his whole life was devoted to helping people and also to recharge the spiritual places like alandi. he visited many spiritual places of india like kashi, trimbakeshwar, alandi and so on. before leaving for srisaila (sri mallikarjuna swamy jyotirlinga is there) for taking samadhi, sri narasimha saraswati swami left his nirguna paduka (sandals) in this ganagapur datta temple.

the paduka is charged with his energy and living presence. sri narasimha saraswati had promised that wherever his paduka will be there, in that place he will abide forever. the padukas are called as nirguna because it is devoid of form or qualities (attributes).

according to guru charitra book, sri narasimha saraswati promised that he would abide forever at ganagapura and will answer all prayers done to him sincerely.

he also promised that:
in the morning – he would bathe at the confluence (holy sangam) of the bhima and amarja rivers in ganagapur.
at midday, he would be visiting the math ((main datta temple) unfailingly. he would accept all worship or pooja offerings given there. he further said that worship offered to the aswatha tree was like worship done to kalpavriksha (wish fulfilling tree).
narasimha saraswati also promised to visit math (main temple) everyday to receive bhiksha.

according to guru charitra book – devotees should first take bath in the holy waters of bhima and amarja rivers in ganagapur. if they bath in all ashta-teerthas then merit will be more. then they should take pradakshina around aswatha tree situated near sangam. they should offer worship to the nirguna padukas at the math (main datta temple). all three times of the day, they should do aarti to the padukas. sri narasimha saraswati swami is very fond of bhajans or kirtans. so do the bhajans at your home and also in the temple. furthermore read the book guru charitra.

there are many stories i heard about this datta temple/math:

1. ganagapur is believed to be the place where lord dattatreya realized the true-self (enlightenment or moksha).

2, it is  believed that devotees should take bhiksha from 5 houses and read guru charitra. many devotees do this. i also read that sri narasimha saraswati also take bhiksha around 12 pm everyday.

4. i also heard that you have to see the datta paduka and dattatreya statue from a small hole (approx 1.5 to 2 feet sized hole). in the morning the datta statue looks like a small child. in the afternoon like a young men and in the evening like a old person. i have seen the dattatreya statue at noon time. lord dattatreya looked like 30-35 year old.

i don’t know how much these above stories, i heard are true. i welcome readers comments about this info. since i had heard a lot about this dattatreya temple. so i decided to visit the temple.

to visit this famous dattatreya temple, i started my journey from kolhapur. first i reached solapur as ganagapur is just 105 km from there. on the way to solapur, i also visited popular pandharpur vittal temple. i took a night halt in solapur after visiting tulja bhavani shakti peeth temple. next day i started my journey for ganagapur datta temple and planned to reach there before 12 pm to attend the thursday aarti. see this spirit possession and also take bhiksha from 5 homes and also to read the guru charitra book there. anyhow my wife was reading this book during those days. for doing all this, you can stay there for one night in ganagpur or come back to nearby cities like gulbarga or solapur in night. although many dharamshala and lodging facilities are there in ganagpur but its a village so you can’t expect much.

35-40 km from solapur is akkalkot town. famous for swami samarth maharaj ashram and his samadhi place. swami samarth is fourth incarnation of lord dattatreya and is a very famous saint in maharashtra. if you go to ganagpur from solapur then akkalkot comes right on the way. you should visit this temple and take swami samarth blessings. when we reached akkalkot we thought of visiting it on return journey as we wanted to reach the ganagpur by 12 pm. so we moved towards ganagpur.

now when i write this post, i feel i should have taken the blessings of swami samarth first and then continued the journey. few km after akkalkot the road became very bad. i have traveled in bad roads. but never traveled in such a bad road for so long distance. trust me, solapur to ganagpur 105 km journey took us more than 4 hours in car. by the time we reached ganagpur we were half tired and when we returned back to akkalkot in night to take swami samarth blessings, we were fully tired and gone for the day. all because of a very bad journey in worst possible indian road. 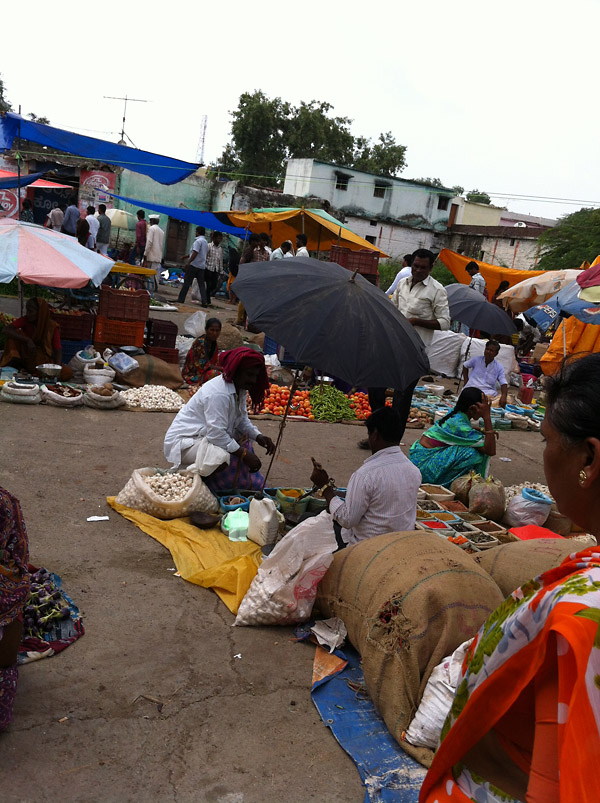 we reached the temple around 1 or 1:30 pm. there was a weekly village market going on. which we had to cross to reach the temple. the bazaar must be perfectly timed to coincide thursday which is the day of guru (spiritual master). lord dattatreya is revered as guru in nath sampradaya, aghoris, by naga sadhus and by millions of devotees in parts of gujarat, karnataka, andhra pradesh and maharashtra. lord dattatreya is also considered as the first guru. 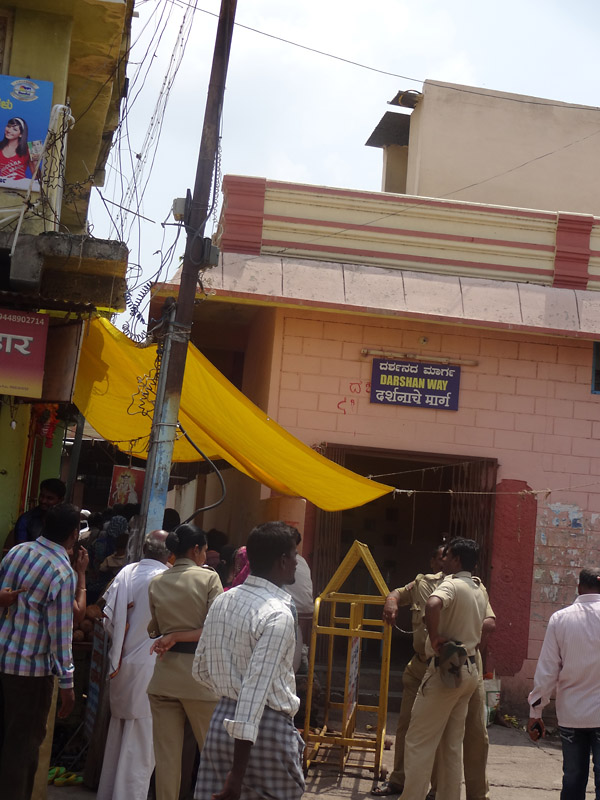 there was a big crowd inside the temple. there were many police personnel around the temple. it was kind of chaos and we didn’t knew which is the main entry to the temple. the sound of loud drums were adding to chaos as well as adding some mystical quality in the air. overall, i liked the drum noise despite the chaos troubling my mind. the line in this above photo is not for the darshan but for the prasad (anna/food prasad). while taking this prasad you also end up doing the parikarma of the temple. 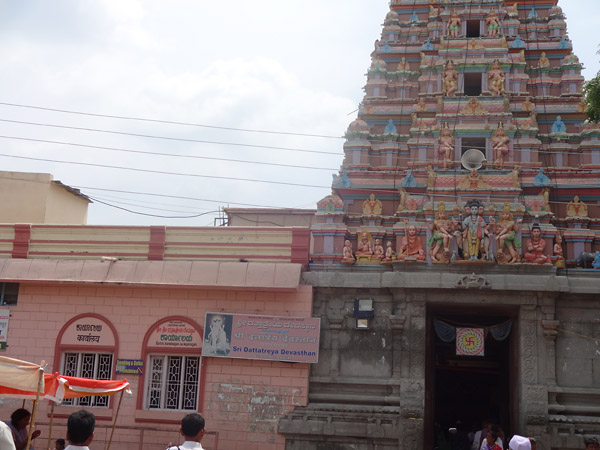 one agent wanted 200 rs for the direct darshan of datta paduka. we avoided the agent, the main gate you see in this above photo looks like the entry gate but actually it was used for exit that day. we asked somebody for direction and entered via back gate. for this go little further right side of this main gate shown in above pic. 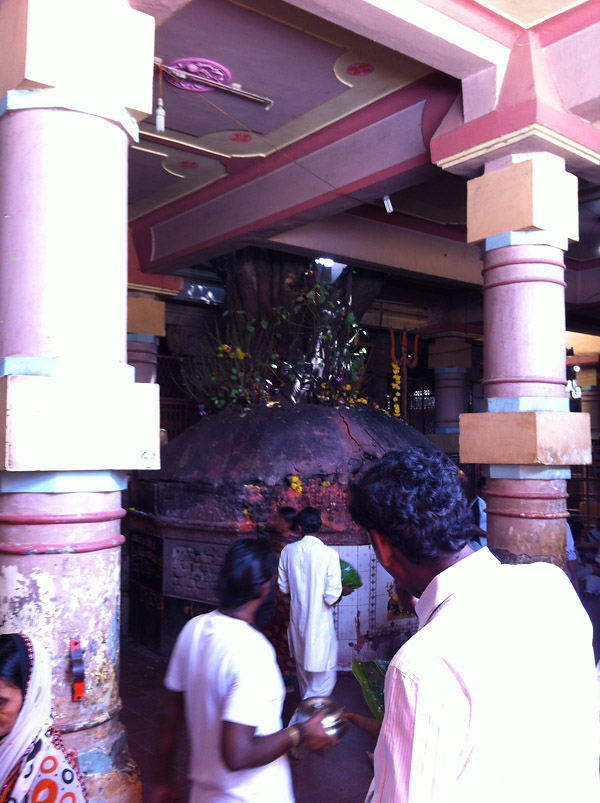 aswatha tree inside the lord dattatreya temple. the tree has died now. in guru charitra book it is written that one brahmarakṣasa was living on this tree and people were afraid to go near the tree. sri narasimha saraswati swami released this brahmarakṣasa and helped him attaining moksha.

note – brahmarakṣasa are those people who die without sharing their knowledge. so they get stuck in between and are not born again. i have read in aghora trilogy book that to get release from this bondage and take another birth, they have to find one worthy person and pass on the knowledge to him… which they had not done consciously/purposely while living. 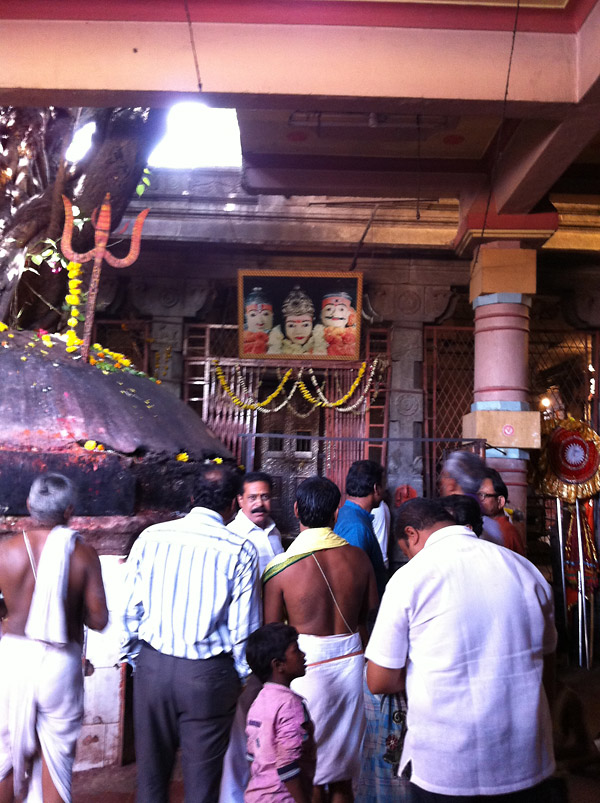 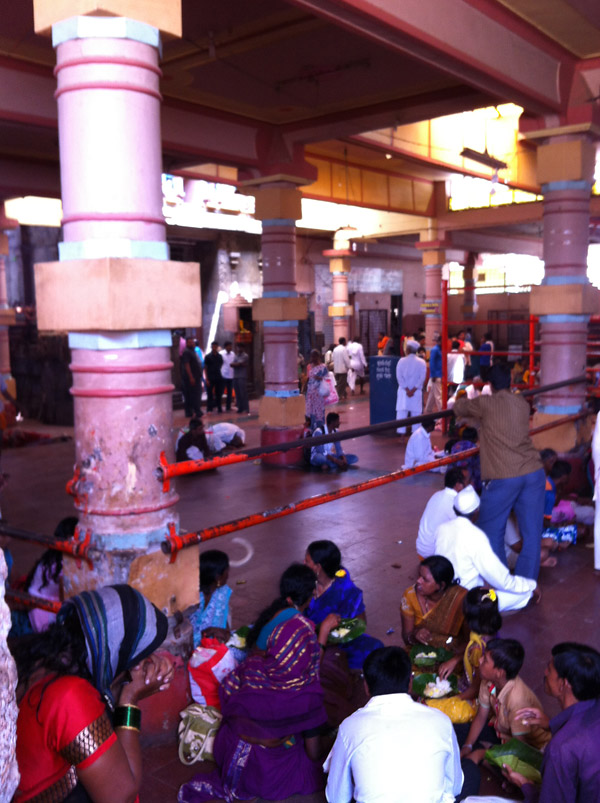 in the temple premises many people were sitting. many ladies possessed with spirits were rolling in the ground or crying. it was sad to see them in such bad condition. there was kind of chaos and lot of noise inside the temple premises. i didn’t find it peaceful. may be on other days, it will be more quite and peaceful. i think more management is needed in the temple. 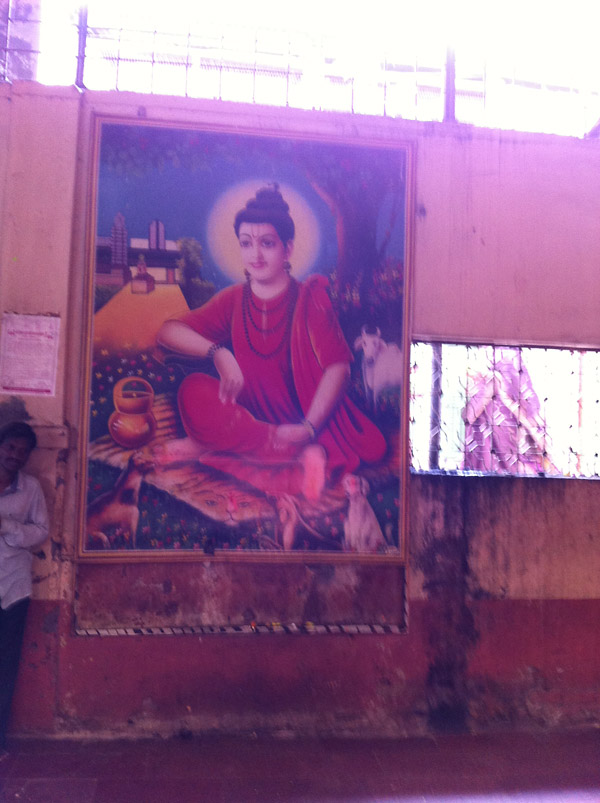 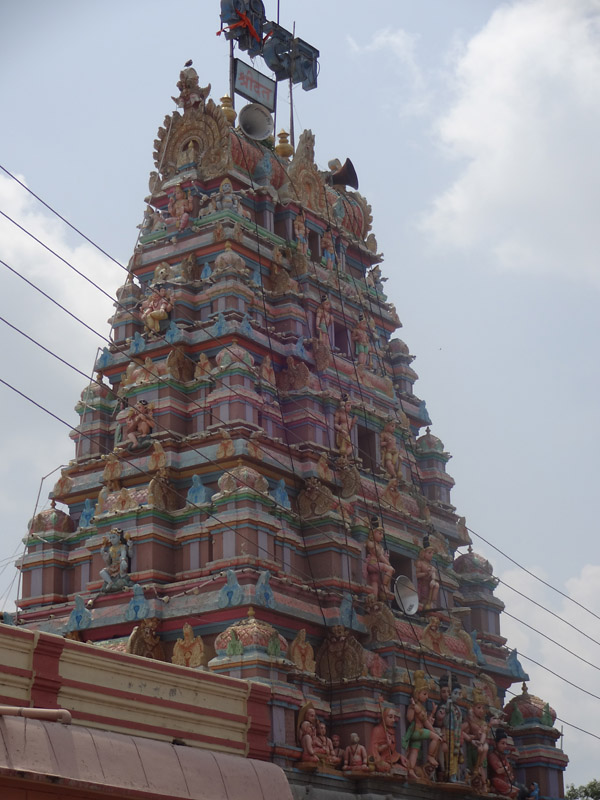 lord dattatreya temple kalash. it has statues of many deities. looks very artistic. 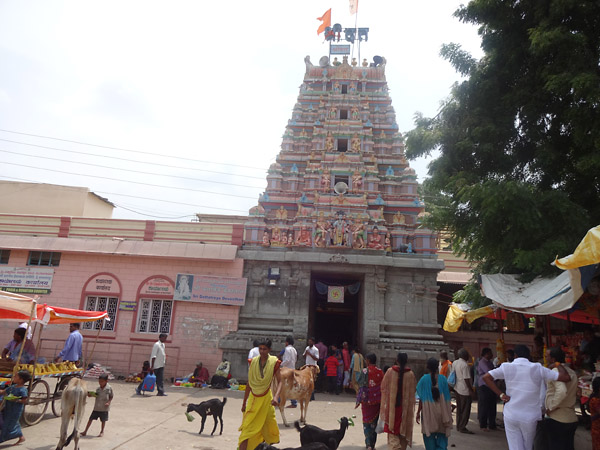 thats how the temple looks from a distance. there are few shops outside the temple selling pooja materials. many pujari/bhat/priest houses are also nearby. in fact, one house is just 3-4 feet away from the temple walls. so you can easily hire priests to do any pooja.

just as we finsihed our darshan, one VIP came with his bodyguards. he was given special treatment and he bypassed all the people standing in the queue. i wish this VIP can help in building the good roads to ganagpur and also help in improving the temple condition. such important temple need to be taken care of… if we want to preserve their sanctity and purity.

other important dattatreya places you should visit in ganagpur:

1. the sangam –  meeting point of bhima and amarja rivers. there is a lot of importance given to taking bath in the holy waters of this sangam. there is a temple nearby known as the sangam temple.

2. audumbar tree – situated near sangam. many devotees read the guru charitra book there.

2. the ant hill –  situated nearer to sangam. it is said that there was a hill from which ash came from the days of lord parashurama. lord parashurama performed penance at this place. the ash is very powerful and now it is in the form of mud only.

4. shree kalleshwar – famous shiva temple in ganagapur. this temple is mentioned as equivalent to gokarna in guru charitra book. the story of poet narahari is mentioned in guru charitra. he used to pray kalleshwar (shiva), once started seeing sri narasimha saraswati in kalleshwara’s place. he became a devotee of sri narasimha saraswati. in this temple, the swayambhu shani and many temples are situated like ashta teerthas, nrusimha theertha, koti theertha, chakra theertha and so on.

i also suggest you to buy a copy of guru charitra and read it with full devotion. it will help you to know more about lord datta and his avatar swami narshima saraswati and sripada sri vallabha.

by road:
distance from nearest city gulbarga (karnataka) is 40 km. there are many state-run buses from gulbarga to ganagapur.
from solapur is 105 km
from hyderabad – 250 to 311 km depending upon route
from mumbai – 515 km
from pune  – 356km

by train: the temple is around 22 km from ‘ganagapur road’ (railway station name) in afzalpur taluk of gulbarga district in karnataka. its on gulbarga-mumbai route.

by airport: nearest airport is of hyderabad and then pune.