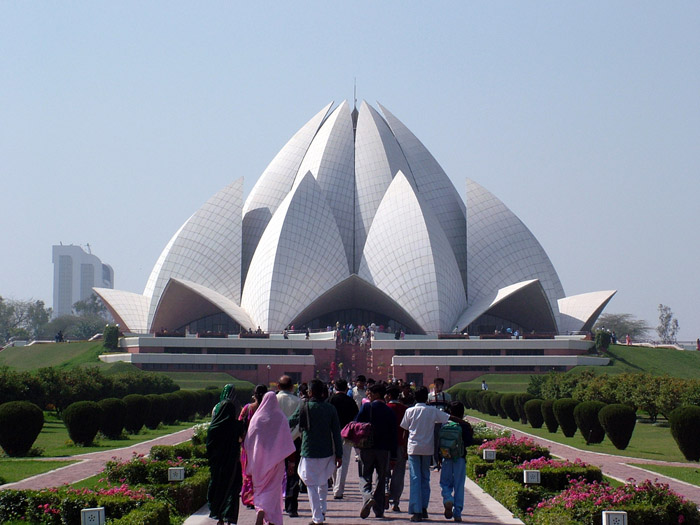 lotus temple in delhi is a place of worship for people from bahai religion. one of the central theme in bahai religion is that there is only one god and the whole creation is created by one god. so the temple is open to people from all religion or caste or nationalities.

the lotus temple is known for its architectural beauty. the temple is made in the shape of lotus flower consisting 27 free-standing marble-clad “petals” arranged in clusters of three to form nine sides. the nine doors of the lotus temple open onto a central hall. in the hall there is no idol or pictures. but you can sit and pray in silence or do meditation. the entire temple is made from white marble which adds lot of beauty to the temple.

the iranian architect furiburz sabha chose the lotus as the symbol because lotus is common to hinduism, buddhism, jainism and islam. in hinduism lotus flower is associated with the seventh chakra or crown chakra. a fully bloomed lotus is associated with enlightenment (moksha). so for a person who has attained to samadhi, it is considered that all the petals of his lotus flower (crown chakra) has opened fully.

people from all faiths are welcomed to sit in silence or meditate inside this huge temple. it is one of those place where you can actually experience silence. specially true in case of delhi which is bursting with population. 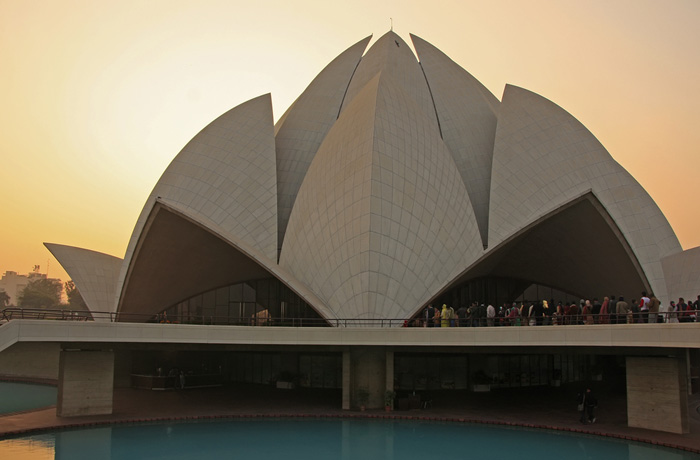 the entire lotus temple property is spread over 26 acres. the temple is surrounded by well maintained garden and 9 ponds. it is one of the most visited place in delhi along with swami narayan akshardham temple. the temple gets a lot of visitors during festival days.

the temple is very neat and well maintained. inside the temple there is pin drop silence. the silence can be scary at times because you suddenly get to face yourself. otherwise all the time you are so much distracted by social media, cinema or work load. so its rare that you get to spend some time alone and be with yourself.

visiting the temple – it is situated behind kalka mandir. get off the metro at kalkaji mandir station. its close to nehru place. the temple is visible from nehru place market also. close by is the iskcon temple of hare rama hare krishna movement.

if you want to be in silence or want to spend time in greenery then consider visiting the temple. also a good place to reflect within. do some introspection or get away from the pressure of society and getting in touch with your inner nature.

best time to visit is when its not very hot. because the floor gets hot during summers or afternoon time. so taking 15 minutes walk around temple platform could be difficult on a hot day with barefoot. as you have to leave the shoes outside the temple. so don’t remove your socks while going inside the temple. also handy to carry a umbrella if visiting during afternoon. delhi gets quite hot during summers and temperature can go upto 45 degree also.

note – another similar place i had visited is sri sri ravi shankar ashram in bangalore outskirts. the massive prayer hall building there shows the seven chakras with petals.