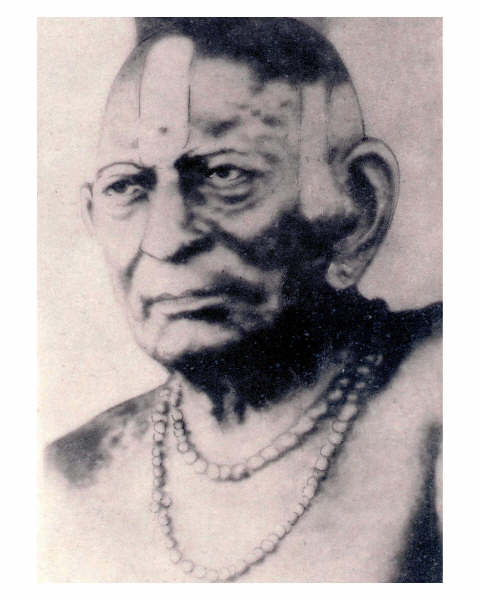 at first look the person in the photo, appeared to be very ancient or from another planet. looked like a very old and ferocious soul. someone who is not from our world. i was attracted towards the photo but i let it go.

after few years, when i moved to maharashtra, i often saw samarth maharaj photos in many shops. i understood that he is one of the most popular saint in maharashtra. little search in google told me that he is equally popular in andhra pradesh and karnataka.

slowly the swami opened his eyes. the swami was not shri narasimha saraswati but his reincarnation sri samarth maharaj. the woodcutter was scared on seeing that his axe had fallen on the thigh of a swami in deep meditation state. sri samarth maharaj told the woodcutter “don’t be scared my child. it is god will that i should come out from my samadhi now and resume my spiritual mission”. the scar on the thigh remained life long.

after this, shri swami samarth traveled all over the india as well as china, tibet and nepal. few prominent spiritual places he visited in india are puri, benaras (kashi), haridwar, rameswaram, girnar, ganagapura, kathiawad and mangalvedha (its 30 km from pandharpur) and eventually set his abode at akkalkot village in maharashtra, india. many stories of miracle and healing happened during this period.

swami samarth didn’t gave any sermon or spoke much. he didn’t wrote any book. his presence was enough to clear the doubts of devotees. he used to love feeding large amount of people. he had many spiritual powers and siddhis. one of them was to feed hundreds of people from a small amount of food. in his life time he cured many people of their diseases and other problems.

he was also fond of dogs and cows. in his words “love the poor creatures. you have no right to kill them. just as human beings have the right to live; so do all the animals and creatures have a right. all creatures whether reptiles, animals or human beings are created and looked after by the one almighty only. all are his creation”.

i visited the temple when it was getting late in the evening. so the photos have not come out well.

many people worship this sacred banyan tree as swami samarth used to sit under this tree. the tree covers a part of the temple complex.

the temple complex is neat and clean. well maintained temple with lot of devotional vibrations. the pujaris don’t push you for money. you can also book an abhishekem. its not a very big temple and is not commercialized. so you feel silence and peace pervading in the temple complex. its an altogether different vibration belonging to a different era. very relaxing and spiritually charged place.

maintain peace and silence in the temple. photography is not allowed. swami samarth maharaj was a very loving and compassionate soul but strict also. so maintain the purity in body and mind. 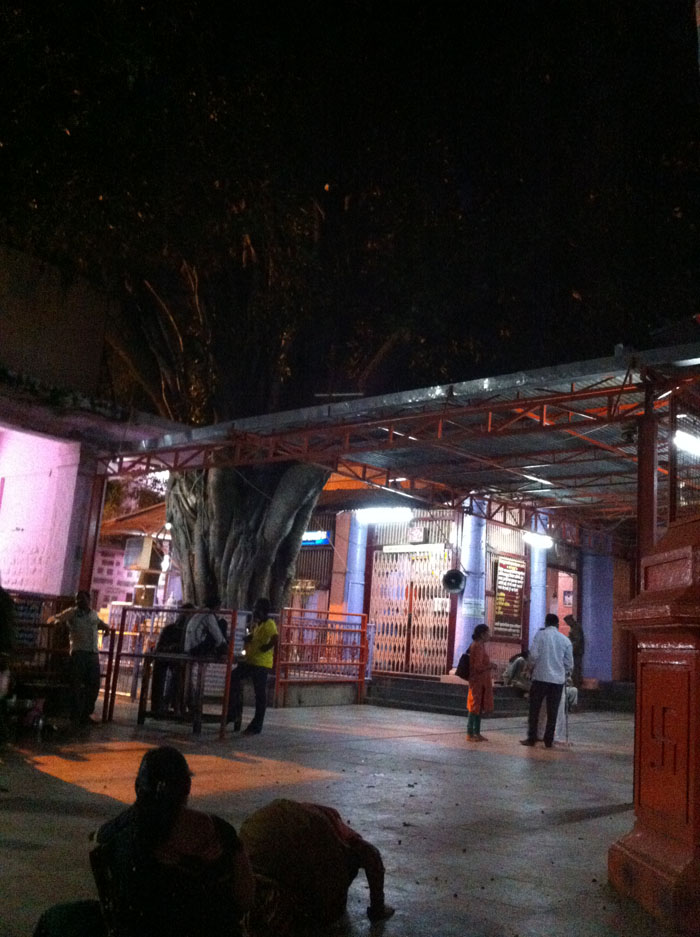 swami samarth maharaj temple complex. mahaprasad is served every day at a place across the temple road. i heard, in afternoon food is also served. 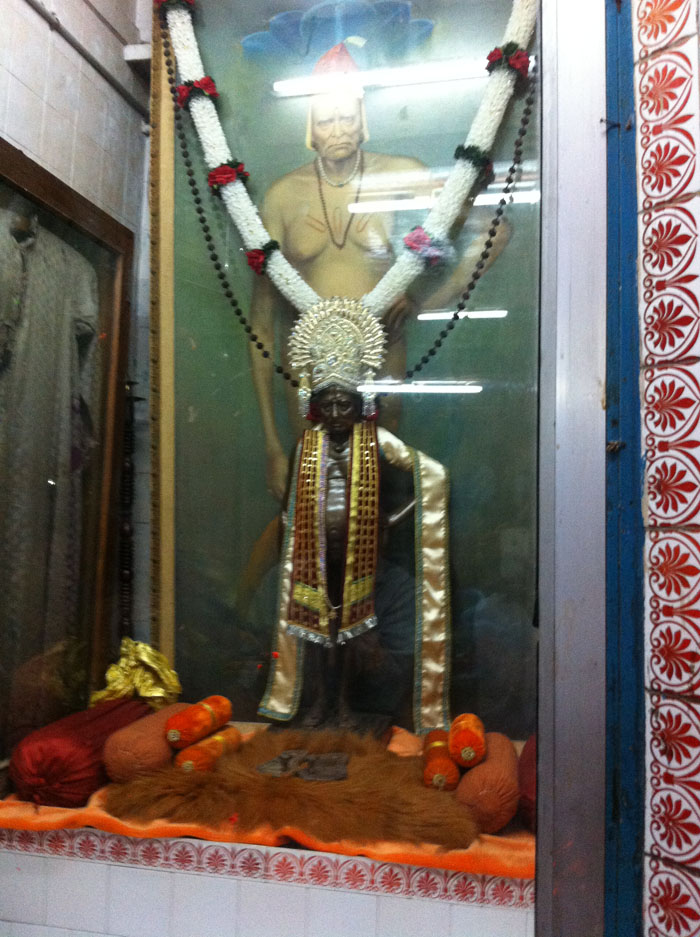 swami samarth maharaj statue and idol in the ashram. on left hand side of photo you can see the maharaj robe. 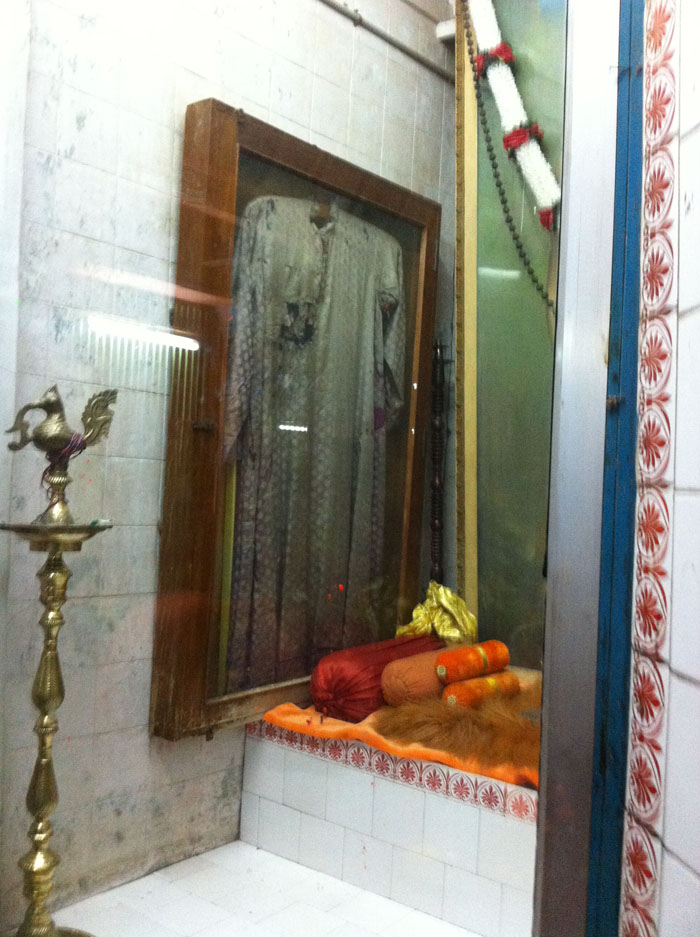 swami samarth maharaj samadhi photo. the samadhi is not in the ashram complex. its about 1-2 km away in another temple. cholappa was one of the most devoted disciple of samarth maharaj. he had a very intense desire that maharaj samadhi should be made in his house. so cholappa  secretly made the preparation for the samadhi in the compound of his house.

samarth maharaj knew about this weired desire of his devotee. once while passing by his house, maharaj said “cholappa, i shall put you in that ditch first; i shall not be leaving before you pack off”.

after some months of this prophecy, cholappa passed away. samarth maharaj also left the body (died) in 1878 after some months. swami samarth last words or the final message was “no one should weep. i shall be always present at all places. i shall respond to every call of the devotees”. sai baba of shirdi had also said exactly the same thing before his mahasamadhi.

samarth maharaj body was taken all around the city in huge procession and finally taken to cholappa house. maharaj body was duly worshipped as per rituals. then the body was placed in lotus posture inside the vault and the vault was closed. the above photos is of the maharaj samadhi.

how to visit the ashram in akkalkot:
akkalkot is a small town in solapur city. it is around 40 km from the solapur.
1. by road – akkalkot ST bus stand is around 2 km from the temple. however, between 12:30 and 2 pm buses go directly to temple.
2. by train – nearest railway station is of akkalkot which is at a distance of 7 km from the main temple.
3. by plane – nearest airport will be of pune.

around 50 rooms bhakti nivas is maintained by the temple trust. you can get room there for around 450 Rs one day. the food served there is good and hygienic. if visiting the temple during festival days then its better to book the room in advance. no online booking facility is there. hot water is available between 4 to 7 am. solapur is little hot in climate as compared to other cities of maharashtra. in summers, temperature can easily cross 40 degrees.

spiritual places near by:
1. tulja bhavani temple in solapur.
2. revansiddeshwar temple – old shiva temple in solapur
2. siddheshwar temple – peaceful temple in middle of a lake in solapur.
3. vitthal rukmini temple in pandharpur. it is one of the most popular and important religious place of maharashtra. situated around 68 km from solapur
4. ganagpur, famous for lord dattatreya temple. it is around 106 km from solapur. if you start from solapur then on the way you can visit swami samarth ashram and samadhi. and then proceed to gangapur. take care to start early in the morning as road between akkalkot and gangapur is not well maintained. check from the locals about the road condition. gangapur is a very small town. i suggest to come back to solapur in night for staying in a good hotel.
5. akkalkot is also famous for gajanan maharaj’s shivpuri, where ancient vedic agnihotra ritual is performed. this ritual is done to purify the fire element out of 5 elements.