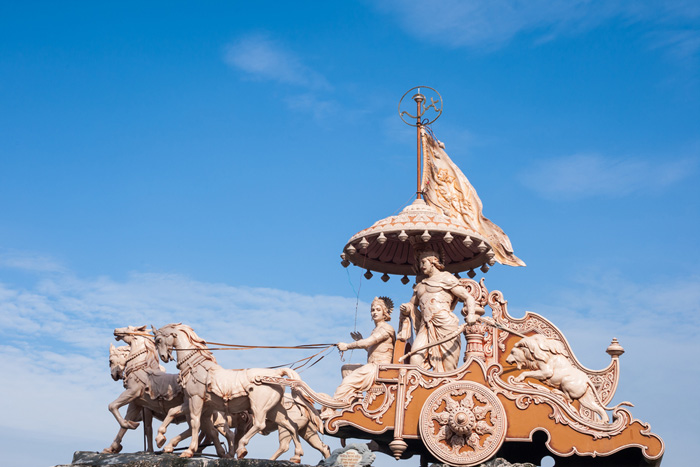 mahabharata war will never be forgotten by indians. its already 5000 years the war had been fought between armies of pandavas and kauravas. but the impact of the war can still be felt in psyche of indians.

before the mahabharata war india was at its peak of glory. but with mahabharata war the decline started and india could never recovered from the disaster of the war. it was the mother of all wars. never again war had been fought on such a large scale. this was the first time nuclear weapon (bhramashtra) had been used in a war.

there are many lessons which we can learn from mahabharata. the most important lesson is that the purpose of our action is more important than the action itself. lord krishna choosed every trick of the trade to defeat kauravas because he wanted to save dharma (righteousness). so intention behind your karma is very important. if the end is right then the means to achieve that desired end is justified. thats the philosophy used in tantra also.

1. greed and jealousy leads to misery – the root cause of mahabharata war was greed, jealousy and revenge. dhritarashtra had the desire that his son duryodhana should become the next king. duryodhana himself was also greedy for becoming a king. he could have easily share part of his kingdom with pandavas and avoided the war. but the desire of taking revenge and jealousy overpowered his intelligence.

2. use all means to avoid war – fighting a war should always be the last option. thats why lord krishna went to kauravas camp as pandavas ambassador. he tried his best to convince duryodhana to avoid the war. but duryodhana was not ready to give even one inch of land to pandavas. pandavas tried all possible options before choosing the war.

3. be so strong that nobody choose to fight with you – duryodhana choosed to went into war because he was confident of winning it. almost all powerful warriors of that time were in his camp like bhisham pitamah, dronacharya and karna. lord krishna had promised that he won’t pick up weapons in the war. if he knew that pandavas have the means to win the war then probably the mahabharata war would not have happened.

4. strategy is more important weapons – although lord krishna didn’t participated in the war directly. but he played the most important role in the pandavas victory. the kauravas army was much bigger and stronger than pandavas army but they were defeated because of lord krishna tactics. lord krishna knew the weakness of each warrior of kauavas and he used their weakness to kill them. knowledge about your enemy weakness is more important than collecting a big army.

5. fight for dharma (righteousness) – if you have to choose between saving dharma with a war and non-violence, then choose war to save the dharma. if pandavas had not fought the war then you don’t know what bigger calamity duryodhana rule would have brought on bharat (india). most importantly it would have set a bad precedence.

6. choose adharma, if needed to save dharma – kauravas broke many rules of war like how they killed abhimanyu. so they lose the right to be treated with dharma. so lord krishna also suggested adharmic means to defeat kauravas like killing of bhisham pitamah, dronacharya, karna, duryodhana and burishwara.

7. rule of warfare changes for offenders – when karna, duryodhana and burishwara were injured and finally killed with treachery they protested. they asked why the rule of war has been broken. so they were reminded by pandavas that they themselves have broken the law in past by killing abhimanyu by unfair means. although they had themselves broken the rule of war they expected to be treated with dharma. so during the war if the opposing party sets a bad precedent in war then it is alright to treat them in the same way. speak in the language which other party understands.

8. don’t identify with your actions – after the war pandavas were in deep pain as they knew they had killed their family members to win the war. on the other hand lord krishna was not in pain. this is because pandavas had identified themselves with the action of killing. pandavas were fighting for their rights and for their respect. bhima also wanted to take revenge for draupadi insult. so they were very much identified with their actions. whereas lord krishna was detached during the war. krishna participated in the war to save dharma but he was not identified with any emotions like revenge, anger, jealousy. so, if you identify with your actions then law of karma becomes applicable to you.

9. war leads to all round destruction – nobody gains anything from the war. pandavas didn’t rule the kingdom after the war. they went to pilgrimage to clean the sins of war. so avoid the war at any cost. the best way to avoid war is to be so strong that nobody wants to fight with you. secondly, only the best person should rule the kingdom. meritocracy should be the rule. bhisham pitamah should have been made king by his father. second mistake was made by dhritarashtra when he choosed duryodhana over yudhishtra.

10. listen to your gurus and wise people – duryodhana didn’t listened to his guru dronacharya and wise people bhisham pitamah, vidhura and kripacharya. by ignoring the advise of wise people he brought the destruction to his entire clan. on the other hand, pandavas listened to their advisor lord krishna. although they didn’t agree with krishna suggestions every time, but despite that they choose to follow what krishna said and they won the war. so listen to the wise people.