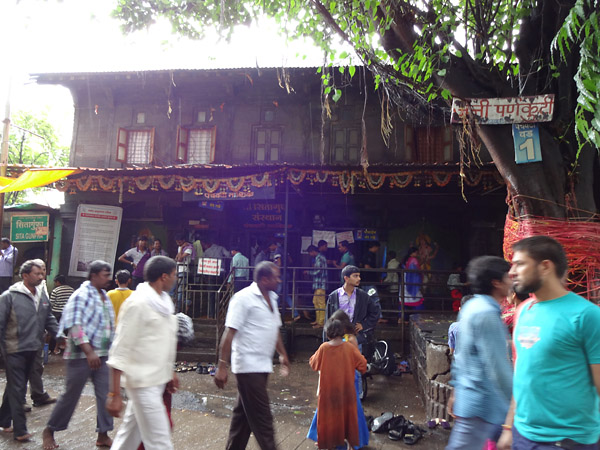 normally, i start early from shirdi and it takes 3-4 hours to reach nashik in car. to visit, sita gufa it takes around 3o minutes depending upon crowd.

there are many spiritually charged places in and around nashik. two more places which i love to visit around nashik are saptashrungi devi temple and trimbakeshwar shiva temple. ideally, you will need minimum 1-2 days to visit all these three places. if you start your journey from nashik early in the morning then you can visit sita gufa, saptashrungi devi temple and trimbakeshwar jyothirlinga shiva temple in one day itself.

it is believed that during 14 years of exile lord rama, laxmana and ma sita stayed in panchvati area of nashik. the whole panchvati areas is about 5 km.

the literal meaning of panchvati is 5 (panch) banyan trees (vat tree). these five ancient banyan trees are still situated around the sita gufa and are marked with numbers, so you can easily identify them. below is the pic of one banyan tree which is right in front of sita gufa/cave temple.

the sita gufa/cave temple is very small. you can easily pass it without recognizing it. its right on the main road and autorikshaws or cars also ply on this road. but the gupha is really charged with spiritual energies and a must visit place in nashik.

below pic showing sita gufa premises from front. in the banyan tree, you can see the number plate 1. this way, they have marked all the five ancient banyan/vat trees. this is the same banyan tree which is shown above from different angle.

in this pic, there is no crowd. but on normal days it can take 20 minutes to one hour to go inside the gufa. but on some days the place may not have any crowd. once i visited during monsoon and there was no queue at all.

the below pic, shows another close up photo of banyan tree in front of sita gupha.

inside the sita gufa, you have to bend down to go through it. there are steps which goes down and then goes up. so mostly people sit on steps and go inside the gufa. the height of the gufa is around 2.5 to 3 feet and it becomes narrow as you go inside. so very obese people or people have breathing issue may have problem visiting the gufa.

it hardly takes one minute to cover the gufa. there are two small spaces/rooms in the gufa. in the first space, the idols of lord rama, laxmana and ma sita are there. in the next adjoining space, shivalinga is there and then you come out from the gufa by climbing up the steps. photography is banned inside the premises and you need to switch off the camera also.

although the whole sita gufa is very small but it really recharges you. a must visit place for spiritual people or for lord rama lovers.

the place needs more care and protection. there is no designated places to remove your slippers. so you can leave it outside the place. behind the gufa premises, thali food is served for around 60 INR. i have not eaten it so can not say much on the quality.

our guide told that when laxmana cut the nose of surpanakha then 10,000 demons came to fight lord rama and laxmana. at that time panchvati was a dense forest. so to hide ma sita, rama and laxmana made this gufa in one night. as an identification mark they planted these 5 banyan trees. i don’t know how much this story is true. but if you consider the gufa structure then this story has some validity. because the gufa become narrow as go inside. this must be made this way so that huge demons cannot go inside it.

when we stand in queue to visit sita gufa, then the shop next to gufa continuously plays the scene from ramayan serial by ramanand sagar in which ravana abducts the ma sita. many people believe that ma sita was abducted by ravana from this place.

in these 9 temples, i liked the sita gufa, kalaram temple, goraram temple and one shiva temple which is unique in the sense that there lord shiva accepted nandi as his guru because he told him how to get rid of the sin of cutting one head of brahma (story told by tour guide).

people who are lord rama devotees, there are many important places nearby:


1. they can also visit the rama kund near godavari river (around .5 to 1 km from sita gufa), where it is believed that rama used to take bath during his stay in panchvati.

2. it is believed that from panchvati, demon king ravana abucted the ma sita. the place where demon marich was killed is also in front of sita gufa.

3. godavari river is very close to panchvati and here the kumbh mela occurs every 12 years. it is believed that near godavari river in nashik, laxmana cut the nose of ravana sister surpanakha and thats how nashik city got its name.

this gardua rath is next to kalaram temple. in front of kala ram temple, there is this below structure named “ancient ram laxman gufa”. in the panchvati region you will see many such places.

below is the pic of another very small hanuman temple in front of kalaram temple. you can see many such small temples in nashik.

nashik is also called as benaras of south india. nashik is one of those 4 cities where it is believed that amrit (nectar of immortality) fell during samundar manthan or the churning of ocean by devas and asuras (demons). other three cities being allahabad (prayag), haridwar and ujjain.

saint ramdas guru of shivaji maharaj also did his penance in godavari river only. he also stayed in panchvati area.

other spiritual places in nashik:

1. around 60-65 km from nashik is saptashrungi devi temple. it is considered as half shakti peeth. there is a lot of crowd in this temple during navratri festival.

2. trimbakeshwar is around 28 km from nashik. it is mainly famous for shiva jyothirlinga temple. it is also believed to be the birth place of lord hanuman. 4-5 km before trimbakeshwar shiva temple there is a anjani temple (mother of lord hanuman) and from there you have to walk 2-3 km to visit the birth place of lord hanuman. never been there but this is what i read in internet. like this there are few important places in trimbakeshwar. it will take you around 2 days to visit all these places and for many places you have to walk on foot. the samadhi of elder brother of sant gyaneshwar is also there.