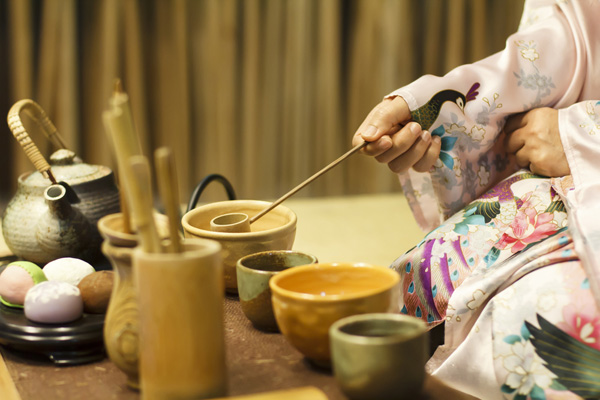 there is an ancient zen story on how the tea leaves came into existence. one of the greatest zen master bodhidharma was teaching meditation to his disciples. many of the zen monks were just beginners in meditation and not fully centered into the meditation. if often happens with most meditator… when you start your meditation practice then you realize that your mind has become too active (full of thoughts) or too much sleepy.

same was happening with some of the meditators. they were often falling asleep and needed constant attention from bodhidharma. over a period of time, bodhidharma thought that he needs to create some device to keep his disciple more alert and awake. meditation is all about being alert about your body and mind movements.

it is said that to help his disciples, bodhidharma plucked his eye-lids and threw them into the earth. after few days a beautiful plant grew out from the eye-lids of bodhidharma. the leaves of this plant are used to make tea. that is why tea keeps you awake and fresh.

in the zen monasteries they have turned each act into a meditation. the basic criteria for meditation is watchfulness or alertness. any act which is done with alertness or full consciousness becomes meditative.

in zen, the emphasis is not given on the act but how the act is done or how much consciousness you have brought into your actions. if you can bring more consciousness to your action, more meditative you will become. e.g. even today, the japanese have a tea ceremony which is like a meditation practice as they prepare, serve and drink the tea very reverently, aesthetically and meditatively.

tea is a excellent drink for meditators as during meditation practice many beginners start feeling sleepy. a good strong cup of tea can keep you awake for longer period of time. but too much of everything is bad. so take tea in moderation and drink it meditatively.

drinking tea could be part of your meditation practice. prepare the tea reverentially and with awareness. then serve it slowly. have each sip of tea with full awareness. feel the warmth and aroma of tea. be in the moment. be here and now. watch the thoughts going on in your mind. so basically drinking tea should not be a separate activity but a meditation in itself and then you have paid your respect to great zen master bodhidharma.

as you grow in meditation then meditation should not become a separate activity. instead bring the meditative quality in each and every act of yours.