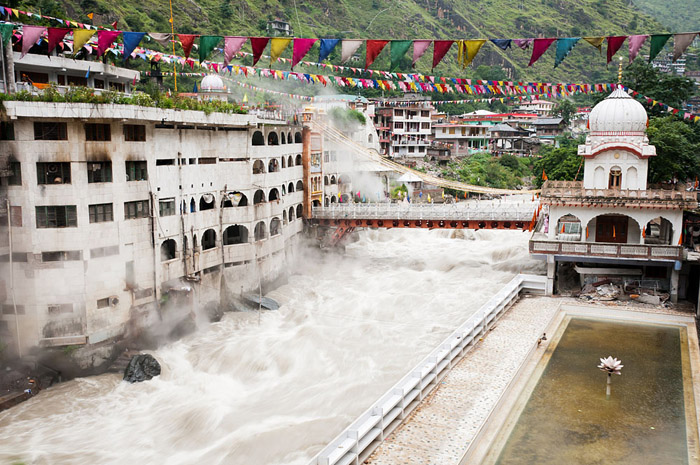 manikaran is a religious place holding special significance for hindus and sikhs. the place is also known for its hot water springs and natural beauty.

manikaran is situated in the parvati valley between the rivers parvati and beas in the kullu district of himachal pradesh. its about 45 km from kullu. by car it will take around 1 hour or you can take bus from kullu.

the journey to manikaran will take you to a picturesque landscape with lot of greenery specially pine trees, tall mountains and river water making a lot of noise. the river water is crystal clear and air quality is very pure. so the place not only uplifts the soul with its spirituality but is also beneficial for your body-mind.

significance for sikhs – guru nanak dev visited this place with his disciple mardana. mardana was feeling hungry so guru nanak dev asked him to collect food for langar (noble service of free food offered in most sikh gurudwaras). most people of that area offered whole wheat flour to make rotis (flat bread). but there was no fire to cook the rotis.

if one takes the name of god sincerely then he can easily cross to other world.

its a good custom to keep the first roti (or handful of rice) in the name of god and could be served later on to birds or to cow or to other animals.

significance for hindus – according to legend when lord shiva and ma parvati was roaming in this area they found the place very scenic and full of natural beauty. so they decided to spend some time here. it is believed that they spend around 1100 years here.

during their stay, ma parvati lost her mani (precious stone) in the stream water. upset with the loss of mani, ma parvati asked lord shiva to retrieve the mani. lord shiva asked his ganas (attendant) to find the mani but they could not trace the mani.

lord shiva became angry and opened his third eye. whenever lord shiva third eye opens then its a very critical and turbulent time for everyone. so to pacify the lord shiva, serpent god sheshnag took the task of finding the mani himself. sheshnag hissed and the water spread over the entire area resulting in the emergence of precious stones of the type ma parvati had lost. this pacify lord shiva and ma parvati got her mani back.

the name manikaran has originated from this legend. the water is still hot and is considered extremely auspicious. the water of the spring is also supposed to have curative powers.

there are many temples in the manikaran. but the two most important temple are of lord rama and lord shiva. next to gurudwara is lord shiva temple situated. you can take bath in the hot water also. there are separate kunds for men and women.