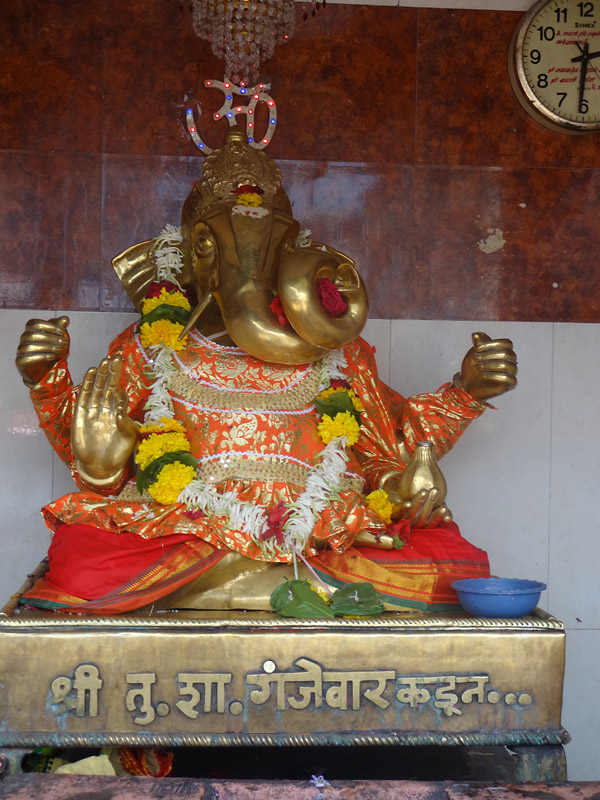 Lord Ganesha is one of the most popular Hindu gods. He is worshiped almost all over India and his blessings are taken before starting any auspicious work.

Lord Ganesha is also known for removing obstacles from life. Ganesha also bestows material prosperity and wisdom on his devotees.

Normally Ganesha trunk will be almost straight and then in the end portion, it will turn left or right or on rare occasions will be straight.

We only have to see the beginning of the curve which Lord Ganesha Statue trunk takes and not the end of the curve.

It is also believed that for the household purpose, The Ganesha statue should be in sitting position so that the god stays in your home. Whereas for pandals (During Ganesha Chaturthi festival), it could be a standing position.

I believe, that if you want to keep Ganesha statue in the home for material prosperity then the trunk should be touching or close to the laddu. Because it represents that Ganesha is having its favorite food in his hand and will offer the prasad to his devotees also.

Here the laddu represents material gain and prosperity. If you want to have spiritual wisdom or spiritual bliss or want to grow spiritually then the trunk should be close to or touching the Modak. You can also refer this post – Symbolism of Lord Ganesha Statue.

2. Lord Ganesha trunk on the right side – This is normally the case with Ganesha statues in temples. Because you need to worship the Ganesha statue with right sided trunk as per correct rituals on every day. Any serious mistake in ritual can bring the wrath of the deity.

The Ganesha statue with trunk on the right side is called as ‘Siddhi Vinayaka‘ because if worshiped correctly then it can give quick results or siddhis. If you happen to visit Mumbai then do visit the famous Siddhi Vinayak temple. It is known for fulfilling the wishes of those people who pray with sincerity and intense devotion.

Right sided Ganesha statue is believed to be representing your Pingala Nadi which is related with the sun energy. It is masculine and has fiery nature but can give quick results. If the fire is used properly it cook your food and the same fire element will also help you to digest food in your stomach. However, the same fire can burn you also, if handled improperly. So discipline, sincerity in devotion and worship is important for Ganesha statue with right-side trunk.

You have to follow the rituals properly if you want to have right sided Ganesha Statue in your home or in your pooja place.

I have read the book of Pandit Gopi Krishna whose kundalini shakti was activated from Sun (Pingala) Nadi and he got into a lot of trouble. After suffering for many years, he was finally able to activate his moon (Ida) Nadi to bring coolness to his head which balanced the fire of already activated Pingala Nadi and he was finally relieved from too much heat in his body.

3. Lord Ganesha trunk is facing straight forward – It signifies that the Sushumna Nadi is entirely open. Such idols are very rare and special. Even more special is the trunk where the trunk is swung upright in the air. It means the kundalini shakti has reached the Sahasrara (crown chakra) permanently.

Also, remember in mind that Ganesha is a sattvic deity. So avoid having non-veg food at home. Create a pure and satvic environment at home.

The favorite food of Lord Ganesha is Modak and Laddu. Whenever you plan to make prasad for Ganesha then make it with a lot of devotion and purity. Never taste the food that is meant to be offered to Lord Ganesha.

Once Ganesha has taken the prasad then only you can consume the food as a prasad. Secondly, avoid adding onions and garlic to the food which is meant to be offered to Lord Ganesha.

You can offer Jaswanti (Hibiscus) flowers to the Ganesha along with Dhruva grass.

This Post from the blog archives, first published in July 2014 has been republished and updated on December 2022.