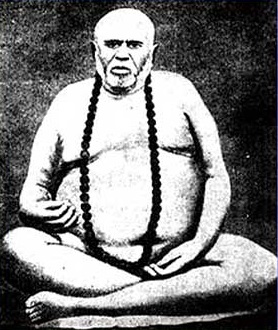 swami trailanga of benares is renown for his miracles all over india. it won’t be wrong, if some one calls him jesus christ of india. it is believed that he was nearly 300 years old when he left his body (died).

trailanga swami always remained completely nude. there are many sects in india which don’t wear any kind of clothes. e.g. naga sadhus and a particular sect in jain religion. trailanga swami used to ate only occasionally. he would stay with out food for weeks and then he would break his fast with potfuls of clabbered milk offered to him by devotees. despite of this fasting Swami Trailanga weight was around 300 kg. many people say, he added one kg of weight for every year.

trailanga swami remained silent for most part of his life and very rarely spoke. one exception to this rule was his meeting with lahiri mahasaya (from kriya yoga tradition). while his meeting with lahiri mahasaya, he broke his silence for a while to pay respect to lahiri mahasaya. more than words trailanga swami was teaching through his actions. every sage has its own way to teaching. e.g. sufi mystic mulla nasruddin used to teach through his insightful jokes and stories. whereas ramana maharshi spoke very rarely and his message transmitted in the silence.

many times trailanga swami was seen drinking deadliest of poison with no ill effect. other very common sight at manikarnika ghat of ganges river was the trailanga swami’s motionless body on the blistering stone slabs, wholly exposed to the merciless indian sun.

these miracles of trailanga swami could have been taken as tricks of fake masters but sri ramakrishna paramhansa (guru of swami vivekananda) also used to consider trailanga swami as an incarnation of lord shiva and as an fully enlightened being. trailanga swami was a authentic saint of india who lived his life in this world, yet his consciousness always resided in the other world.

even in the book “kundalini’ – aghora (volume – II) by robert e. svoboda, his tantric guru have praise trailanga swami very highly and said that he was an enlightened mystic.

if we look at the life and miracles of trailanga swami then we can easily see that a men is much more than body-mind to which he is normally identified. to grow spiritually we have to transcend our normal identification with the body-mind mechanism and work from no-mind state.