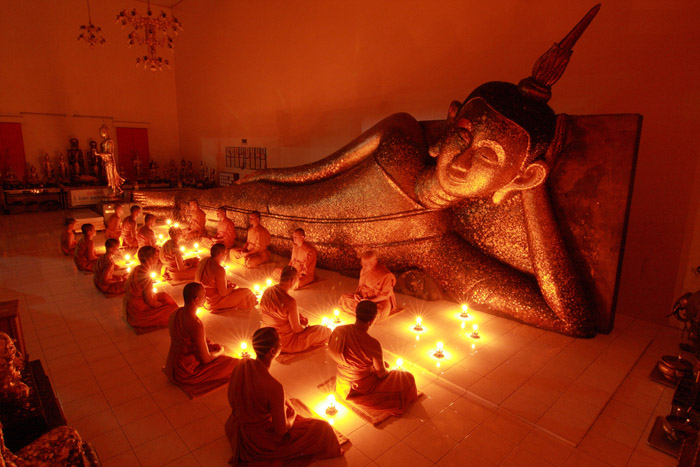 its not easy to spot a fake guru because we trust the master blindly. the mind tries to justify every action of guru saying that there is some purpose behind it. may be the guru is testing you or trying to remove your bad karmas. moreover most fake guru behave very nicely in public. its only in their private life that their real nature comes out openly.

at the end of the day if you don’t want to be cheated then i suggest three things:
1. never be greedy in spiritual world.
2. don’t go for quick gains. no body can walk on the path for you.
3. always trust your gut feeling.

few facts before we discuss how to know a fake guru:

1. it is not easy to spot a fake guru as well as to find a real guru. because you are unconsciousness and seeking help. you are open, vulnerable and trusting. so anything is possible. many times seekers miss the real guru. sometimes they end up spending time with fake gurus. so you can miss both ways. its not easy to find who is real and who is fake. so if you have spend some time with a fake guru then don’t have any guilt feeling. try to move. keep on walking on the path.

2. if the sadhak is not sincere then he may not gain in the presence of a genuine guru also. on the other hand, the person who is sincere might gain in the presence of a fake guru also. two things are very important in spiritual search. one is your sincerity and second is to find a real guru. finding real guru also depends upon your past karmas. so one thing which is surely in your hand is to be sincere in the spiritual search. be total in your search and rest assure that you will be guided by higher forces. that help can come from a real guru or from a fake guru or from existence or from anywhere else. don’t worry about the help, it will come.

3. always listen to your inner voice. trust it because its your inner guru. the outer guru helps you to get in touch with your inner guru or to find your inner harmony. so always trust your gut feeling whenever it says something.

4. not every realized master has samadhi at third eye. he can have samadhi at heart chakra or at throat chakra. so the discrimination and wisdom which comes with third eye samadhi might be missing with many sages. they may be very loving, compassionate and realized but not very  articulate with their words or very intelligent in their actions. they may not have tried many paths. they may behave childish at times and yet they are realized souls. so many such realized beings can be missed as fake gurus. at the same time the mistakes of many fake gurus are forgiven in name of divine play or exercise to teach lesson to disciple or thinking that guru knows more than us or disciple should have infallible trust on guru to receive his grace or guru is testing the disciples. so its always tricky. there is no hard and fast rule which you can apply to judge fake or real gurus.

few tips on how to know a fake guru:

1. gurudom – the real guru is not interested in himself. he is interested in the growth of the disciple. first few signs of fake gurudom is giving fancy titles to themselves. proclaiming themselves to be incarnation or successor of some great master. having goals of becoming a big guru or making a worldwide movement or many ashrams. real guru is never greedy for materialistic gains.

2. interested in making money – some amount of physical comfort and luxury is alright. but excess of this shows something may not be right with the guru. if the guru is giving importance to people who are rich but not sincere in spiritual path then something is fishy. at the same time renunciation of worldly things does not mean that the person is a real master. a real guru can stay in a palace and yet live a detached life. e.g. read about the life of king janaka. what is important is not outward renunciation but inward renunciation and detachment.

3. showing off spiritual powers and siddhis – in general, a real master does not perform miracles. but miracles happen around him. but it does not mean that real guru don’t use spiritual powers to help their disciples. they do it when it is absolutely needed but they don’t do it to show off or to attract attention. remember, many fake gurus are interested in name and fame.

4. promising quick progress – anybody who promise you very quick result in sadhana or kundalini explosion or grace or shaktipath, then rest assure that 99.9% of times you have come across a fake guru. in spiritual world, nobody can do miracles for you. you have to walk on your path. you have to realize your true nature. when someone promise quick progress to you then he is saying that “he will eat the food and it will cure your hunger”. so don’t trust such people. at the same time, some masters do take the bad karmas of disciple on themselves to quicken their progress.

6. eye test – many spiritual gurus practice concentration exercises to get powers or to get hypnotizing gaze. this make their eyes very tense and focused. avoid the gurus who have tense and focused eyes. the real guru eyes are innocent and pure like a child and yet have the depth of a wise men. they are not concentrated but relaxed. if you look deeply into the eyes of a real guru then you may get lost in them. they will have the depth of a lake or you will feel that you are falling in the abyss. remember this word abyss as the real samadhi experience is like falling into a black hole or into a deep abyss. its very scary feeling and you will feel that you won’t exist or won’t be anymore if you fall into the black hole. looking into the eye of a real guru might also give you the feeling of falling into an abyss.

if you look into the eye of a real guru then you will see nothing. no presence, only emptiness (shunyata). if you see any greed or desire then that person has not reached. secondly, since the real guru is empty (shunya) from within. so he acts like a mirror. in his eyes you can see your real face. your desires and aspirations.

7. presence – if you are open then in the presence of a guru you will be spiritually uplifted. you can feel few things like inner harmony, relaxation, meditation or spiritual sadhana is easier. you are more loving and at ease with things. but still this is not a sure shot sign. as i have paid few visits to a spiritual master in mumbai whose room was charged with relaxed energy but he was not enlightened. a real master presence will help you in getting in touch with your true self.

8. here yet not here – the real guru presence is such that his body is here but his consciousness is somewhere else (up or beyond our perception). you may not feel aura around him. this part is little tricky to explain.

9. egolessness – contrary to the belief, ego is not destroyed during samadhi. some amount of ego is always left and it is good. because it helps to survive in this world. so the real master also has a personality. the real master can also be really childish at times during moments of ecstasy. basically the actions of a real master should be detached and carry signs of egolessness.

10. crystalline energy and integrity – there will a definite integrity in the person who has achieved samadhi. because now his energy is not getting dissipated or wasted. they are becoming a pool of energy because of desirelessness. remember, with every desire you lose energy.

even after writing this post, i cannot say with guarantee that i will not miss recognizing a real guru. according to me the real touch stone is your gut feeling. never cheat others and never lie to yourself. keep your inner voice intact as it will save you from many cheaters. always do good karma because karma is real and will come back to you.

don’t worry so much about meeting a false guru. just make sure that you are true and honest in your search. rest leave it on god. existence answers your every call. if your call is fake then thats what existence will give it back to you. in the end, we learn from every experience. so whatever happens keep on moving on the path. keep on moving. don’t stop any where.