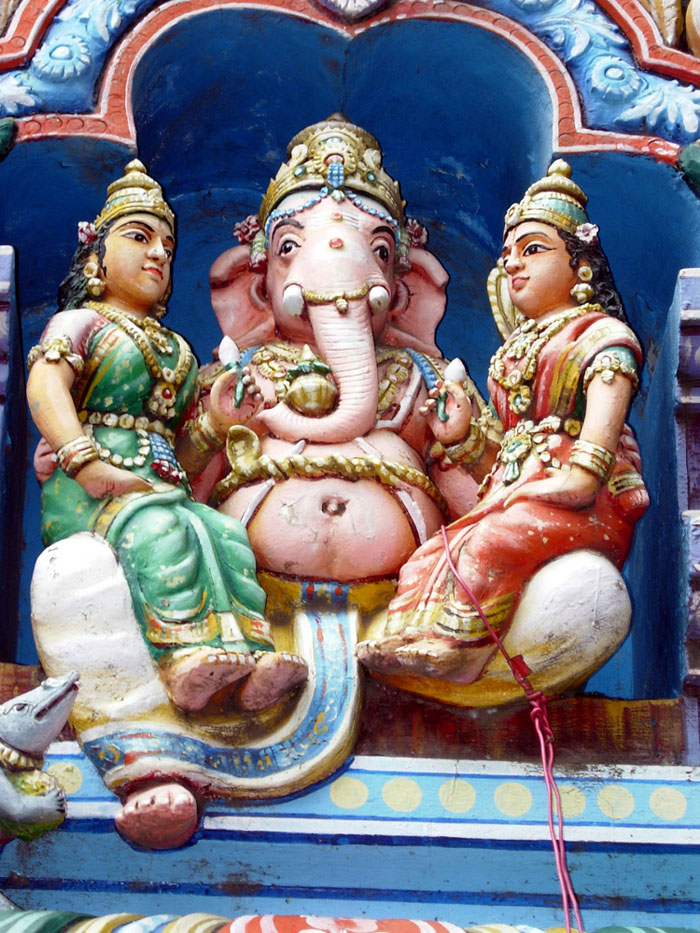 but in some parts of india, it is believed that lord ganesha is married to ‘buddhi’ and ‘siddhi‘. this story has a mention in one of the puranas. according to this legend, lord ganesha has two sons: kşema (prosperity) and lābha (profit). in north india the sons are often called as Śubha (auspiciouness) and Lābha (gain).

in the very popular hindi movie “jai santoshi maa” lord ganesha is shown to be married to ‘riddhi’ and ‘siddhi’ and having a daughter named santoshi ma, who is goddess of satisfaction. this story has no puranic basis but is generally accepted now.

in the popular ashtavinayaka temple in morgaon (maharashtra), lord ganesha as ‘shri mayureshwara’ is shown with his consorts ‘buddhi’ and ‘siddhi’.

story of lord ganesha marriage – when lord ganesha and lord subrahmanya reached marriageable age. then lord shiva and ma parvati thought of getting them married. when both of them came to know this, then they wanted to get married first and started arguing.

seeing their arguments, lord shiva told them whosoever will come back here after taking seven rounds of mother earth will be married first. listening this lord subrahmanya  immediately set off on his vahana peacock with great speed to go around the earth quickly and return earlier than ganesha.

when lord shiva asked him why he is not going around the earth. so lord ganesha replied that by going around you i have taken 7 rounds of whole world. as you both are center of this world and control all the worlds. so i have completed the seven rounds first. so i should be married first.

editor’s note – the story represents that lord ganesha is the master of buddhi (intelligence), riddhi (prosperity) and siddhi (spiritual attainment). generally ma laxmi (deity of prosperity) and ma saraswati (deity of knowledge) does not stay together in one house. either you have knowledge or you have prosperity in the house. if you want both prosperity and wisdom together, then you are suppose to worship lord ganesha.

good links from web on this topic:

1. what is the secret meaning of lord ganesha and his consorts?

2. the marriage of lord ganesha (siddhivinayak.org)