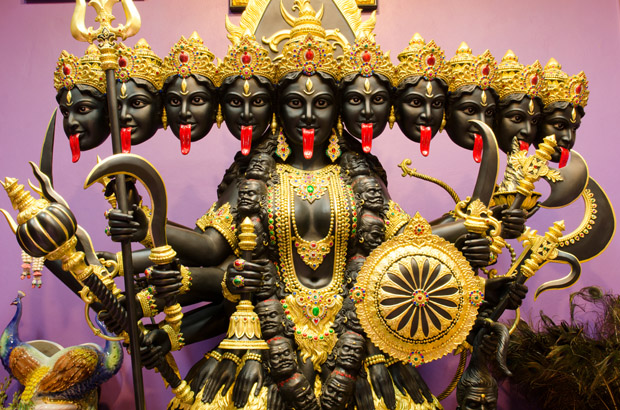 tantra is not for everyone. it is for selected few. the need of guru is emphasized in every spiritual path. but many people have reached without guru also. but in tantra its not like this. the guru is almost must in tantra. you cannot venture into tantra or aghora without a guru. otherwise you are bound to burn your hands.

so the books which i am mentioning below will not teach you real tantra. but they will just act as an introduction to mantra, tantra or aghora. aghora is the extreme side of tantra and is very scientific method but again for rarest of rare people.

tantra is for those daring souls who wants to use shortcut to the divine and are ready to risk everything for it. you need nerves of steel to be successful in tantra. otherwise the person can die of shock or of heart attack. tantra looks fascinating but don’t experiment with tantra by just reading from books. because most of the times, some important information is missing from most books on tantra or mantra. it is done so that power hungry people can not exploit the tantrik practices or mantras for their selfish desires.

if you are meant to be a tantrik then your guru will find you or you will be lead to him. meantime you can prepare yourself by being sincere in your life, in your sadhana and in worshiping your chosen deity. remember, sincerity is must in every spiritual path. if you are sincere then you will find your way or the path will find you. if you are not sincere then you will miss the real guru if he comes and sit next to you. so first be sincere. below i am listing few books which i liked on tantra/mantra/aghora or are related to it.

my favoriate books on tantra and aghora:

3. aghora series by robert e. svoboda. (my favorite books on tantra)
a)  aghora: at the left hand of god (volume – I)
b) kundalini: aghora (volume – II)

robert e. svoboda is a student of great aghori vimalananda and in this aghora trilogy he has mentioned the teachings of his master. unfortunately only 3 books are written but they are better than 100 others books in market because they are full of gems and insights. the 3rd book is ‘law of karma’ in which vimalananda is speaking about how law of karma works in real life.

read these two books again and again. they are like gita for budding tantriks. every time you read you will get some new insights.

4. “oasis of stillness” by aughar harihar ram – the book is devoted to the life of baba aghoreshwar bhagwan ramji. he is supposed to be from the lineage of 16th century great aghori guru baba kinaram. baba kinaram was taught by lord dattatreya. later on baba kinaram wrote a book called “viveksar”, which is a treatise on the principles of aghor. i have not read this book “viveksar” so can’t say anything about it. but in the world of aghora, baba kinaram is a highly revered guru.

another book which contains the quotes or teachings of baba bhagwan ram is published by the name “the book of aghor wisdom”. both the books are good. i liked oasis of stillness more because it shares the compassionate life of baba bhagwan ram. his ashram in benaras has treated maximum number of leprosy patients. the ashram also contains the samadhi of many enlightened aghoris (probably the number of samadhi is closed to 80)

5. “autobiography of a blue eyes sadhu” by rampuri – story of a american boy who came to india in  late 1960s and became the first foreigner to be accepted in naga baba tradition. he shared his time and journey among naga babas.

8. vijnana bhairava tantra – many people have written their commentary on this book. the one i liked the most is by osho (acharya rajneesh). but hereby i must caution you that osho teachings looks very tempting but it has not helped many people but ruined the lives of many. the reason being total freedom given to do anything in his teachings provided you act out of awareness. according to osho any act done with awareness is right. so his emphasis was on witnessing the mind and being aware in actions and thoughts. he gave a lot of emphasis on living in the moment as when you are in the moment then mind is not there.

but being totally aware is the last stage and only very advanced sadhaks can achieve that for some seconds or minutes or you should be in satori. this teaching is applicable for people who have samadhi. so what osho was saying is right but not applicable to most sadhaks who are at various stages of evolution.

but here again disciples have misunderstood him. if a person can not be aware in day to day life then how he can be aware in intense sexual acts. osho is a great enlightened master but he was greatly misunderstood and he should have spoken to only selected few and only the essential.

9. “yogini” by shambhavi lorain chopra – in this book she shares her spiritual journey. she is a devotee of goddess and has shared how gods and goddesses guided her in the spiritual path. i have shared my review of this book here.

11. “living with himalayan masters” by swami rama – although this book is not on tantra but you will get to read few authentic stories related with sages, tantra or super normal experiences. highly recommended book for sadhak on any path.

12. “tantra unveiled: seducing the forces of matter and spirit” by pandit rajmani tigunait – he is disciple and successor of swami rama of himalayas. in this book he shares his meeting with few tantrik adepts.

in the end, if you ask me to suggest two books out of these list then i would say “aghora series” by robert e. svoboda and “oasis of stillness”