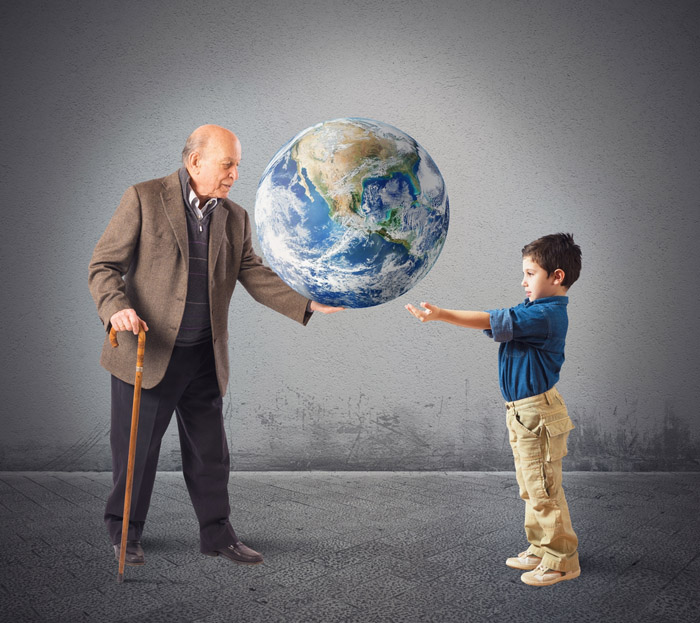 most of us only care about our day to day problems. very few people think about the bigger picture. we think just about our family as if we are living in an island. we forget that we are part of one world. if something wrong happen in any part of the world then it affects us directly or indirectly. it may take some time to show its effect in our life but soon we will feel the ripples reaching us.

the world is like a big cobweb. if you touch one string then the whole world vibrates with that energy. hindus strongly belief in the philosophy of “vasudhaiva kutumbakam” which means “world is one big family”.

so do not use this planet as a dustbin. treat it with love, care and respect. remember, one day you are going to be reborn back to earth unless you become enlightened.

world problems we are gifting to next generation:

1. population explosion – only god can save us from rising population. because except china, no other populated country like india, bangladesh, pakistan is taking serious steps to control population explosion. it puts a lot of burden on our natural resources. the earth natural rescources are limited and sooner or later they will be over.

2. nuclear threat – the major threat is that nuclear bomb should not go into the hands of terrorists. moreover, no neclear power plant should leak radiation.

3. pollution – we have polluted our mother earth at many layers – air, water and soil. this pollution is causing lot of health related problems. the ocean acidity is increasing at a much faster rate. ozone layer is also depleting. but a serious initiation from top countries to tackle all this is still lacking.

4. water crisis – it is believed that after 30 years the countries will fight for water. water is really going to be a major issue in world politics. right now many farmers in india are doing suicide. one of the reason for suicide is that their crops gets destroyed if they don’t get sufficient monsoon.

5. global warming – this is one fact which many people in power don’t want to accept. because then they will be expected to make changes. global warming is behind extreme weather changes which you must have experienced in recent years. droughts, floods, melting of glaciers and rise in temperature is because of global warming.

6. loss of biodiversity – because of massive deforestation, we are losing many species and forests. the whole cycle of nature is getting disrupted. every plant or animal has a special purpose in the cycle of nature. if you remove one link then the whole cycle gets disrupted. human beings should never play with natures law. because nature is much mightier than humans.

9. poverty – one of the worst thing that can happen to you is poverty. because it makes the person vulnerable to exploitation. a poor person has to struggle for even basic rights of living like food, water, shelter and education. his human rights are taken for granted. the gap between rich and poor should be reduced.

10. deforestation – we are losing our forest cover at an astonishing speed. approximate 46-58 thousand square miles of forest are lost every year. this is equivalent to losing 36 football fields forest every minute. with the loss of forests we increase global warming, pollution and danger to wild life.

are we going to do anything about it? few simple things you can do at your end are – plant trees, use organic products, use electricity and water wisely, say No to plastic, use recycled products, use public transport systems and raise your voice about these issues. make people aware about this looming danger on our head.