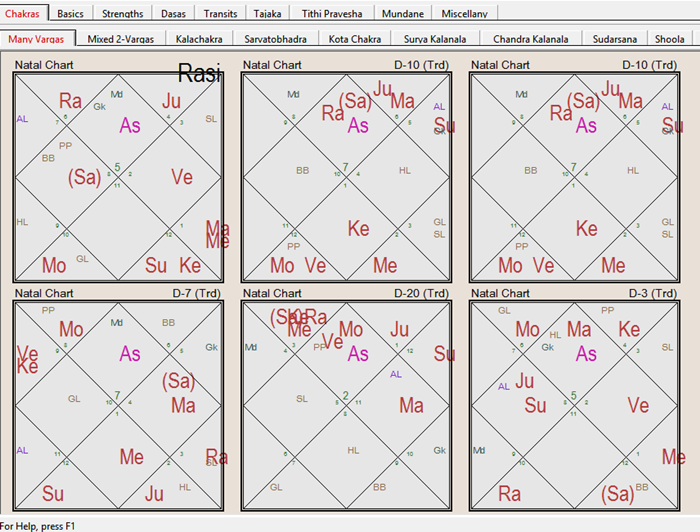 astrology is a divine science. it is part of 6 vedanga (limbs of the veda).

the science of vedic astrology was developed by great sages like parashara, jaimini, bhrigu and many more. so astrology principles can not be wrong but still many times we get wrong predictions. lets know why.

why vedic astrology predictions are not always accurate:

2. not using all the charts – nowadays most astrologer use rashi chart and navamasha chart (D9). but there are many more charts which have importance and should be used. separate charts are made for different queries like marriage, children, career, house/car, spirituality, siblings, wealth etc e.g. for career related questions, the astrologer should consult rashi chart + D10 chart. or for children related questions one should consult rashi chart + D7 chart. rashi chart should ideally be consulted with one more chart so as to verify and give the correct prediction.

3. asking too many questions – when you visit the astrologer, you like to know answers to many questions in 30 minutes or 1 hour time. be very specific. don’t do this, go to a very good astrologer and ask 1-2 questions. so that he can use many techniques to verify his prediction.

e.g. i remember, i once ask a very respected astrologer from south india to teach me advanced astrology. he made a chart using the time when he got my query. reading the chart he said, he is not destined to teach me and the time is not ripe.

note: in prasana astrology, queries can be simply answered by drawing the chart using the time when query is asked. in south india this prasana astrology is practiced with good accuracy. so in my case the respected astrologer had used the prasana chart to answer to my request.

5. not all astrologers are technically sound in astrology – there are many reasons for this.
a) during british time, systematically indian education system or gurukul were destroyed. brahmins started going for english education to get jobs. the loss of gurukul system is irreparable.
b) before astrologers used to get patronage from kings or from rich people. so they could devote ample time to study this divine science. but now no such patronage is there.
c) many secrets have been lost. because the science is not passed on in many cases. there are many astrology secrets which are known to only few families.
d) many of the astrology books have been destroyed. e.g. it is believed that parashara hora has 18 parts but now only 2 parts are available. no idea where rest of 16 parts have disappeared.

6. fall of religion and kalyug – while giving a prediction two things matter that is the knowledge of astrology principles and the intuition (divine grace) of astrologer. since kalyuga is going on, so its going to affect everybody. if astrologer is not truly religious and does not lead a pious life then his intuitive faculty will not work properly. ideally astrologer is expected to live a satvic life and practice mantra chanting regularly. e.g. chanting of gayatri mantra daily for 108 times or multiples of 108.

7. propaganda against vedic culture – vedic lifestyle is not given its due in current time. e.g. yoga, ayurveda, pranayama, astrology, havan (fire ritual) are not given due patronage by govt or media. astrology is often mocked in indian movies. so even small mistakes of astrologers are highlighted but correct predictions are not highlighted or praised. mistakes happen from allopathy doctors also but that is accepted. but not from vedic astrologers. so at one side astrology is made fun of and on other hand a high standard of prediction is accepted from it. so astrology is under much pressure in recent times.

e.g. the general complaint against astrology is that we matched the horoscopes before marriage but still the marriage has not worked out well. astrology can not change your destiny but it can enhanced the positive time to some extent and minimize the negative time to some extent. lets say 5-10% on either side. don’t take astrology as a divine miracle. if you had not consulted the horoscope before marriage then you could have ended up with a even more bad marriage. whatever karma one does, it comes back. astrology has no power to clear your karmas. but it indicates the best way to proceed further with the karma you have committed in the past.

note – the author recommends only those astrology remedies which clears your karma or helps in the growth of soul like mantra chanting, worship of deity, meditation, selfless charity, fasting, austerity, repentance. whereas wearing gems could be a expensive shortcut but does not clear karmas. even bad time is needed in life because one becomes aware of the pain in life and the person who has suffered pain will be more considerate to people in pain, poverty or anguish. so don’t shun the bad time rather try to learn from it. use the bad time to grow within. lets be more compassionate, considerate, loving, peaceful and meditative.